Montreal’s gay nightlife has a flashy tradition of lavish dance clubs and open bars loaded with alcohol. But the real fun happens behind the scenes as DJ Brandon Jones teaches us when the dark, sexy Edji Da Silva steals him away from the dance floor and pulls him back stage. Edji slams Brandon against the wall, holds his arms above his head and starts kissing him, whispering that before too long, he’s going to fuck Brandon hard. They take their shirts off and compare chests: Brandon’s body is gorgeous, lean and toned with every muscle sculpted. Edji is thicker and stronger, which matches his dominant personality. Edji pulls Brandon deeper into the darkness of the backstage where he takes off his pants and presents his erection to Brandon. Instead of returning to the floor, he opens up his throat and swallows Edji, servicing every inch the Arabic Parisian has to offer. Edji finds an empty booth after the club shuts down and bends Brandon over, eating out his ass before rubbing his erection along Brandon’s ass crack, teasing him with what’s to come. Edji stuffs his fat cock down Brandon’s throat again before slipping on a condom and bending the toned DJ over and smearing his ass with lube. Brandon wants Edji to give it to him, and he does just that. Edji doesn’t hold back as he starts thrusting deep into Brandon. Each thrust causes the bottom to moan; Brandon’s made it his job to please Edji, and when he rolls onto his back with his legs spread eagle, the Arabic top penetrates him deep, only to pull out and enter again. All of the fucking and sucking brings Edji to climax, and he blasts his cum into Brandon’s mouth!

Men At Play has just released the solo video of Spencer Reed! He looks amazing in a suit, but as we all we know he would look great in basically anything! His masculine hairy body and handsome face makes him a perfect Men At Play man! Check out his hot solo video and keep in mind that he has 2 more scenes to come out at MenAtPlay.com! Enjoy!

Damien Stone and Adam Herst try to warm themselves up over a burning fire. They’re quickly locked in each other’s arms, kissing and groping. Damien nurses on Adam’s big long dick, feeling it swell up even larger with every slurp. Then to generate more heat, he tends to Adam’s asshole. Both men are soon overwhelmed with fiery intensity, moving Damien to slam his engorged cock up Adam’s manhole. They fuck recklessly in numerous positions totally locked and loaded with Damien churning in and out of his buddy’s ass.

Sexy Jordano Santoro is aiming to get fucked by chiseled Race Cooper. Race is packing serious meat and Jordano swallows it down to his balls. Now on the bed, Race licks and tickles Jordano’s feet, causing him to laugh wildly. He’s extremely ticklish!  Race decides it’s a better idea to suck Jordano’s beautiful cock then risk getting kicked in the face. With Jordano at full mast, Race buries his face in Jordano’s ass making sure to get it ready for his big prick. Jordano kicks his legs back and Race pumps his cock all the way in. Expletives fill the air as the studs fuck feverishly. Race slams Jordano hard until he pops his thick load onto Jordano’s sculpted bubble-butt. Jordano screams as he squeezes out his sweet juice onto his rock hard abs. Race licks Jordano’s seed up and snowballs with him. Hot!

Over the course of the last year, Nash had been sending me update photos. He was looking extra beefy, got his braces off, and I really have been wanting to keep Solomon with guys who have the same muscle mass he does. Plus Nash said he would bottom or flip-flop and Solomon was ready to try Topping again. Well, that plan didn’t work out so well. More on that later.

I bring up Nash’s teeth for another reason. He smiles more and he seemed more eager to suck dick without trying to hide his teeth. Solomon’s attitude on sucking dick has changed too. He seems more relaxed, confident, and more interested in pleasing the other guy, rather than worrying that there is a cock in his mouth.

Nash too attacked Solomon’s cock with new enthusiasm. Solomon refuses to watch the straight porn playing, so I have noticed he closes his eyes and just goes with the feeling. He tends to get very passive, but once his dick wakes up, he LOOKS at the model sucking him. He is There for sure. They 69 for a bit, and also do some standing cock play. Nash sucking Solomon’s dick, then going up for a kiss, sharing the taste of his cock. Nash was only too happy to Take Charge as he is kind of Bossy, so we flipped it around, and Solomon took Nash’s cock.

Francois Sagat has just posted the official – but censored – video of his song with Sylvia Gobbel called “Hadès“! I can’t wait to see the uncensored version, but we have to wait for that a little bit. The song is great and the lyrics are amazing! If your are a fan of Francois‘ I’m sure you will like this video.

Time to shake it up with Aslan Brutti and Carlos Cantor. It was a gorgeous day so we decided to take the action outdoors and film at a secluded backwoods. Our smooth and lean studs get right to it, kissing and undressing each other passionately. Both Aslan and Carlos immediately have raging hard-ons which promptly find each others mouths. The guys throw down a towel and get comfortable 69′ing one another before Aslan shoves his thick dick in Carlos’ tight ass. Aslan pounds his new found friend in various positions, making sure Carlos gets his pink hole all the dick it can handle. With Aslan still inside, Carlos strokes out a big load onto his tight tummy. Aslan soon follows suit squeezing out his warm cum onto Carlos’ balls.

Check out this new “Casting Couch” video with Nicolas Taxman and Stany Falcone from Kristen Bjorn! Make sure you join KristenBjorn.com for hundreds of exclusive premieres, casting couch & behind the scene videos and tons of hot pictures!

With matinee idol good looks, a beautiful body and a very thick club cock, we fell head over heels in lust with Paddy O’Brian. A cheeky cockney charmer, 98% straight and a born exhibitionist, he really loves to be watched. We’re wondering how far he’ll go sexually with another man!!

Angel Rock makes Alex Vaara one of the happiest bottoms alive in this awesome fuck! Angel and Alex are rock hard from the start, and Alex loves trying to stuff his mouth full of Angels stiff latin dick. Alex slurps and sucks like the great dick-sucker he is, and after a while he hops on top of Angel in a 69 and continues to stuff it down his throat. Angel grabs a dildo and loosens up Alex with it as the two continue to suck each other off. Before long, Alex is on his back as Angel slowly enters Alexs firm tight hole. Angel gives it to Alex, but not before he turns him over onto his knees doggie style. At this point, Angel lets loose, fucking the shit out of Alex – who is loving every minute of it and staying hard as a rock himself. On their sides, Angel continues to pound into Alex, passionately kissing him as he forcefully fucks him. Alex blows his load and Angel does the same. These two college hotties make out a while longer – not wanting it to end. Hot Fuck!

Marshall White is a 21 year old stud standing 6-2 and loving every minute of life. Marshall is jacked, and he loves to show off his body. He exudes confidence, and this is exactly the type of college jock senior we love here at CollegeDudes. Marshall takes his time undressing, showing us his sexy underwear and relishing the attention. As he slowly works it up, we can see his arm muscles bulging and his hands at work. Marshall has a nice cock, and lots of stories to tell about it. He strokes it slowly, letting us enjjoy the view, then he gives us an even better view by getting on his knees and showing off his awesome ass. We love the way Marshall plays with himself – he looks good no matter what he is doing. As he leans back into the chair ready to enjoy his climax, his breathing gets a little heavier and he squeezes his cock harder until his creamy load shoots out of his cock. Hot stuff from a very hot dude!

Wow, Spencer Reed has just posted his first official Men At Play photo on Twitter! He looks hot in suit, don’t you think?

He shot 3 scenes with Men At Play during his time in Europe: a solo, a duo with Cavin Knight and another one with Scott Hunter!

You can watch the preview of his 1st Men At Play video HERE, which will be online at MENATPLAY.com tomorrow! 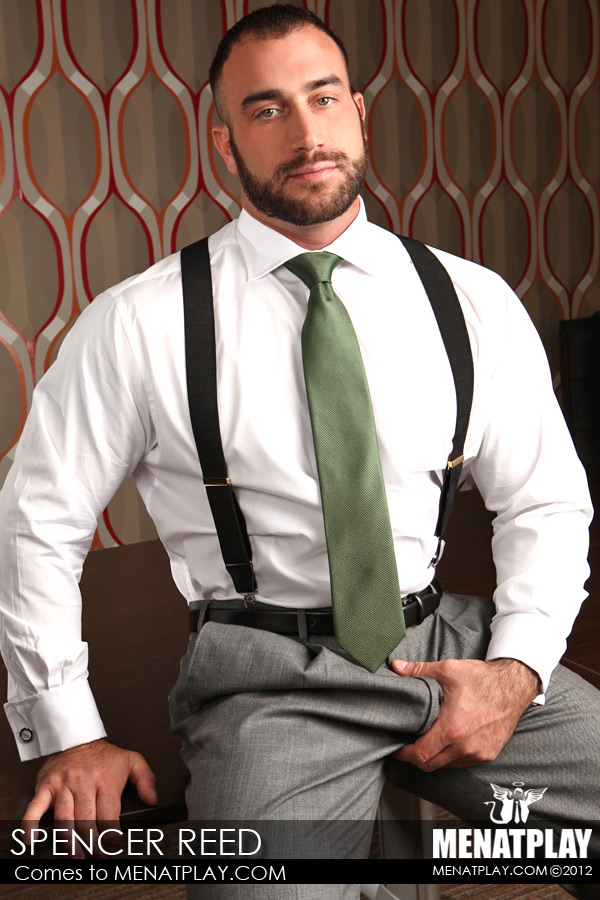 Here is almost all of Spencer Reed’s dvds, there are some very good discounts:

Man, we all do love us some bodybuilders, and Jameson is a couple more fetishes thrown in for good measure. Part college jock, part ginger redhead, but champion jr. bodybuilder through and through. Look at those muscles! Welcome Fratmen Jameson… psst, he’s coming to the Fratpad!